The forest and its biodiversity

Valle di Lodano has a high forest coverage up to the higher elevations, where the alpine pastures are well visible despite the rapid advancement of vegetation. Although at times intense, logging activities ended in the early 1960s and the forest has been gradually regenerating itself through natural evolution.

The forest’s main benefit from Castèll along the Ri dala Vall stream until the valley floor is that of protecting settlements and agricultural land from natural disasters. In the rest of the valley it functions as an integral part of nature, hence the importance of promoting and enhancing biodiversity.

Because of Valle di Lodano’s heterogeneous morphology, its forests are diverse. The lower hill belt is dominated by chestnut groves and pioneer birch forests; and the mild climate in gorges and screes hosts small-leaved lime trees, while the most exposed and arid areas are home to oak trees. The montane belt is dominated by beech: especially on the left-hand side of the valley there are almost pure beech woods with mature specimen; on the opposite shadier side the beech is mingled with the silver fir, increasing in number after years of intense logging. The subalpine belt is dominated by larch, although below Alp da Canaa and around Alp da Nagairón Norway spruce is also present.

Scientific research revealed different forest typologies, among which: the silver fir-Norway spruce forest near Casgèira, particularly well-preserved and therefore rare in Vallemaggia; the Norway spruce forest in its subalpine variation on blocks near Sciüpa d Nagairón; and the birch forest in its alluvial variation with goat willow and larch near Castèll. There are also some interesting tree species, such as the large-leaved lime, the black and grey alders, the alpine laburnum, and the yew. 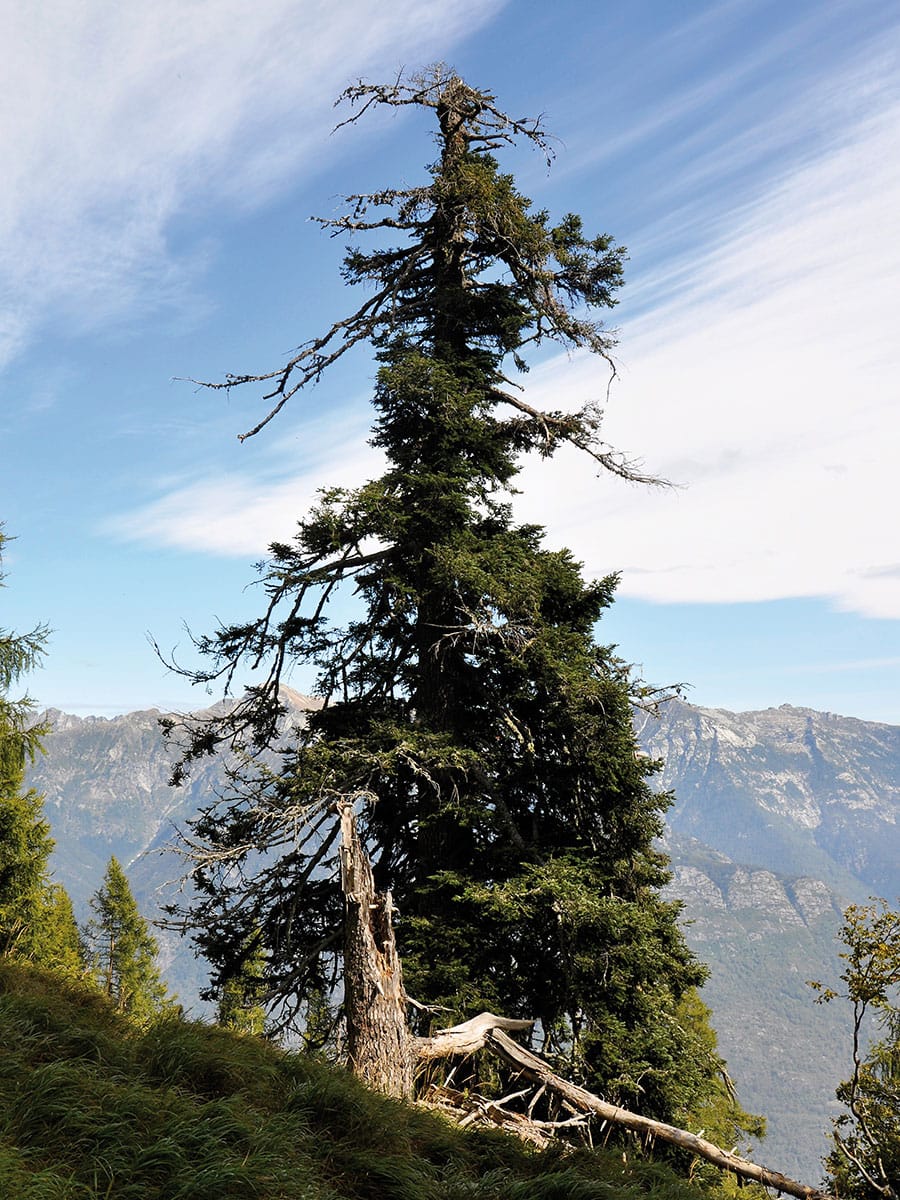 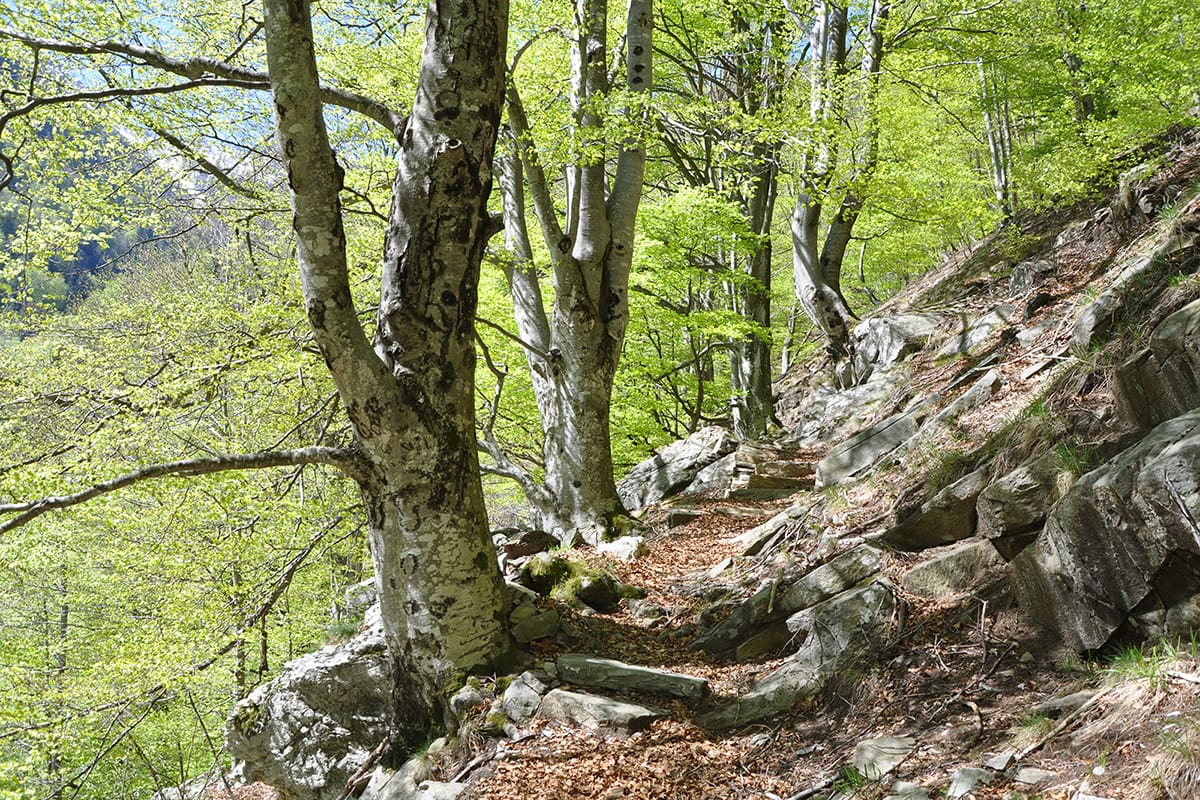 Scientific research and surveys carried out in Valle di Lodano document in great detail the area’s biological diversity, including more than 680 animal and plant species. Capturing the extent of its biodiversity is a daunting task. The risk is that of being too analytic and rational and of removing the fascination that surrounds all living things, even the smallest and apparently most insignificant ones.

How to do justice to the 180 mushroom species or to the 240 plant species recorded in Valle di Lodano? And how to describe the exquisiteness of the 50 butterfly species or the beautiful melodies of the 22 grasshopper species found in meadows and pastures? To capture one species instead of another is to ignore the intrinsic value and ecological importance of each group. For example, each of the 42 species of ants observed is crucial to the proper functioning of the ecosystem.

The diversity of birds that live in the woods is remarkable: 45 species were documented, including the boreal owl, the collared flycatcher, and the hazel grouse. Additionally, researchers documented 22 species of mammals, from the most emblematic such as the alpine ibex and the marmot to the smallest such as the pygmy shrew and the snow vole. Biodiversity is everywhere. Even a decaying tree trunk can be an incredible source of life: 36 species of saproxylic insects, including the Rosalia alpina, feed on decaying wood and find an ideal habitat here.

The presence of rare and endangered species is a privilege. Establishing a forest reserve and maintaining the grassland are important steps in protecting them. Along the centuries-old paths that run through this fascinating territory, be attentive, be curious, and marvel at the incredible forms of life that you encounter. These same species were traveling companions to the alpine farmers and woodcutters who hiked this valley in the past centuries. 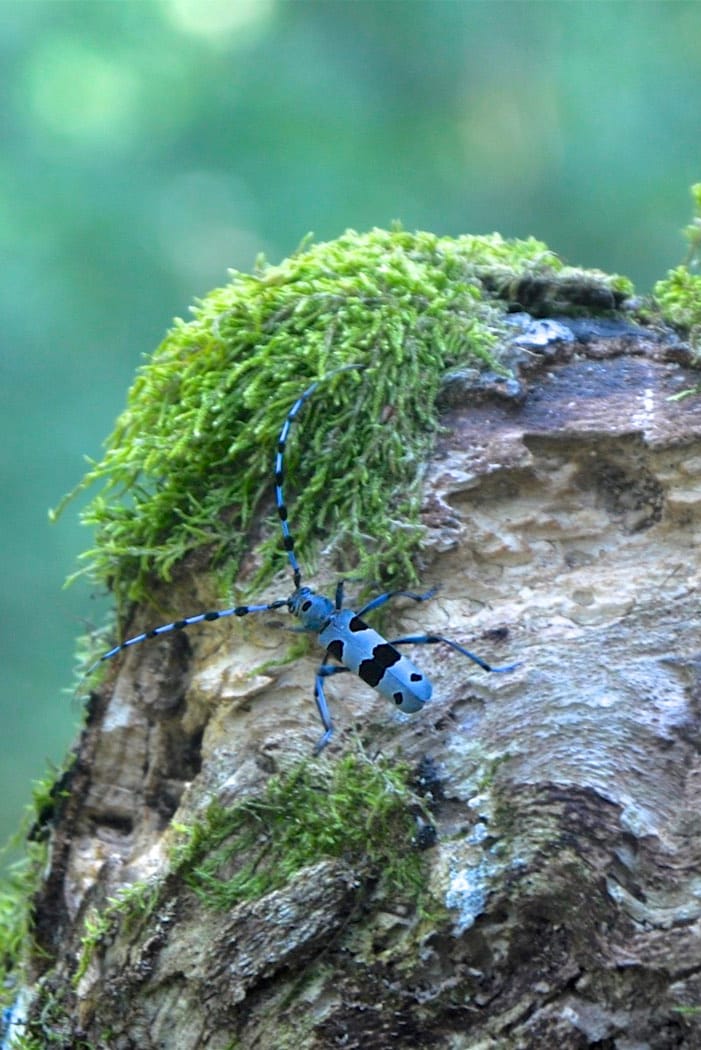 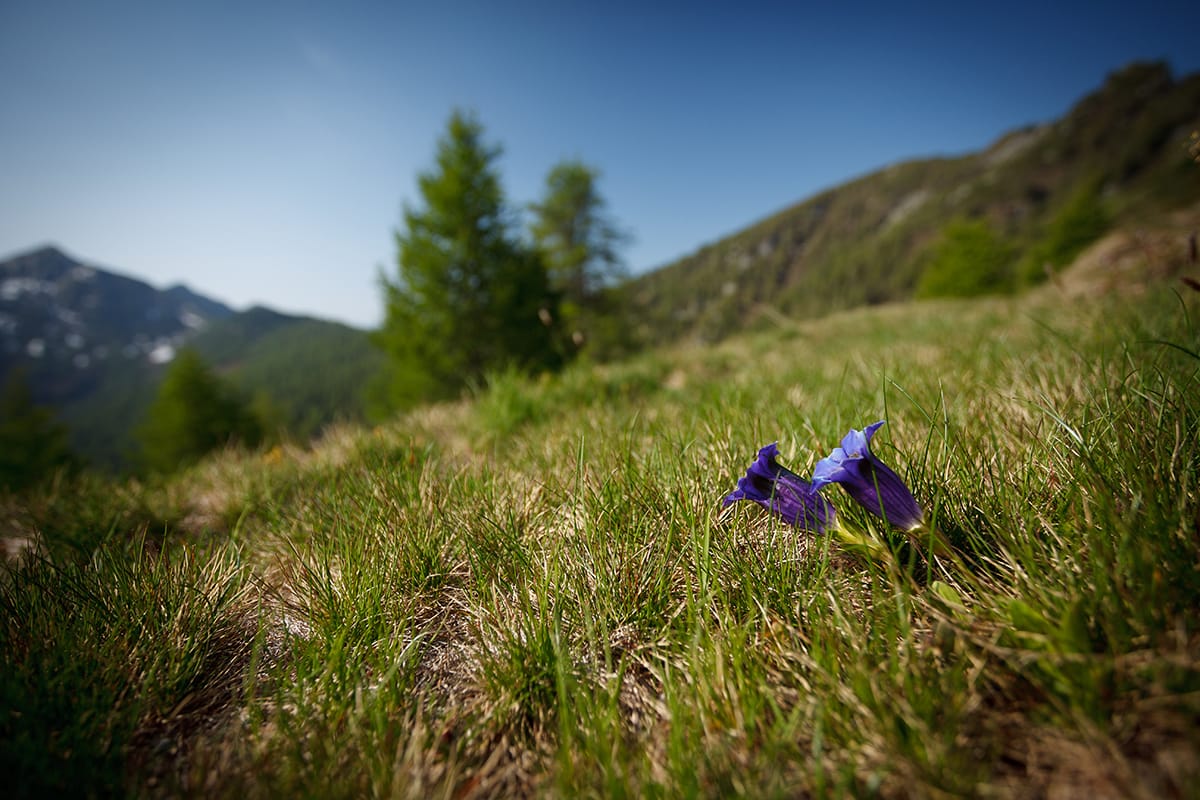 The outstanding universal valueof European beech forests was recognized in 2007 with the addition of the first beech forests to the UNESCO World Heritage List, based on criterion (ix):

«Beech forests are considered an outstanding example of the postglacial ecological and biological evolution of terrestrial ecosystems, still ongoing, which has characterized an entire continent in a global and unique way.»

The outstanding universal value of European beech forests is due to the fact that they survived the last one million years glaciations’ unfavorable climatic conditions. Having found some isolated refuge areas in southern and south-eastern Europe, after the last Ice Age the species expanded north and west along corridors that cross the continent, colonizing territories characterized by marked climatic, geological, and morphological diversity. There are no other tree species that have been able to play such a dominant and unique role as the European beech (Fagus sylvatica). This is the only species that has managed to dominate a whole variety of environmental parameters. European beech forests, especially those long left to natural evolution, represent an exceptional example of complex forests capable of exhibiting a wide range of complete ecological models. They contain a valuable gene pool of beech and of many other species associated with and dependent on these forest habitats.

To date, a representative series of 94 ancient or primary beech forests across 18 European countries has been inscribed on the UNESCO World Heritage List under the property «Ancient and Primeval Beech Forests of the Carpathians and Other Regions of Europe». These forests jointly exhibit an outstanding universal value. The series represents the best beech forests relatively undisturbed by human activity, and together they tell the story of the beech expansion after the last Ice Age, testifying to the adaptability of the species to a variety of environmental conditions.

The contribution of the Vallemaggia beech forests to the series represents an extraordinary example of the expansion of the beech tree in the southern Alpine region following the last Ice Age, about 6'000 years ago.  This example is particularly representative for its position in an area of climatic and geological transition, for its marked altitudinal gradient, and for the siliceous rocky substratum. These conditions resulted in the dominant presence of a particular type of forest called beech forest with snowy wood-rush.

«The World Heritage label is the most prestigious recognition that can be given to a natural landscape and at the same time represents a commitment to its conservation for future generations.» (Swiss Alps Jungfrau-Aletsch UNESCO World Heritage Site).

To visit the ancient beech forests of Valle di Lodano we suggest itineraries 1, 2, and 3 which you find on this site. 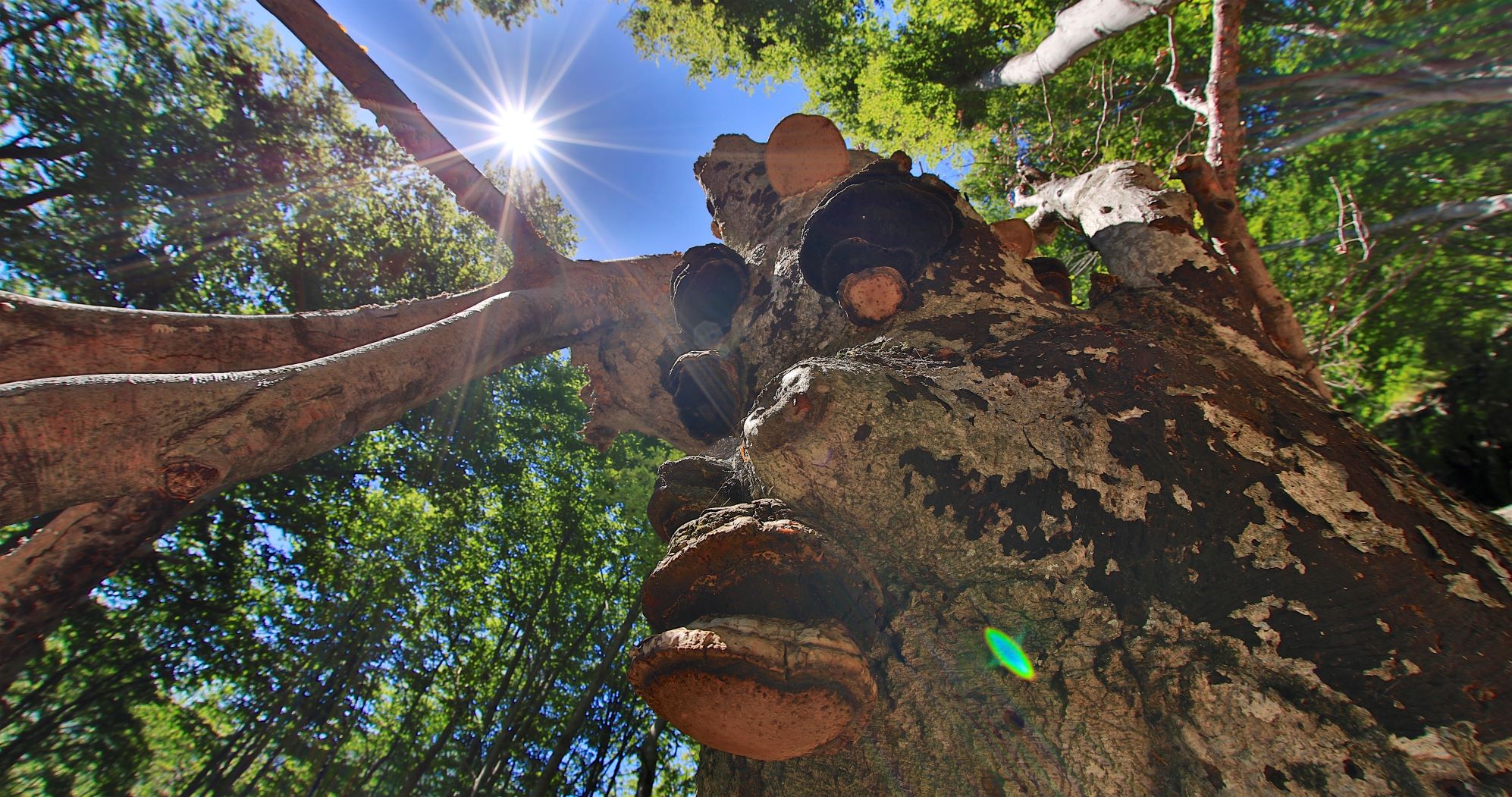 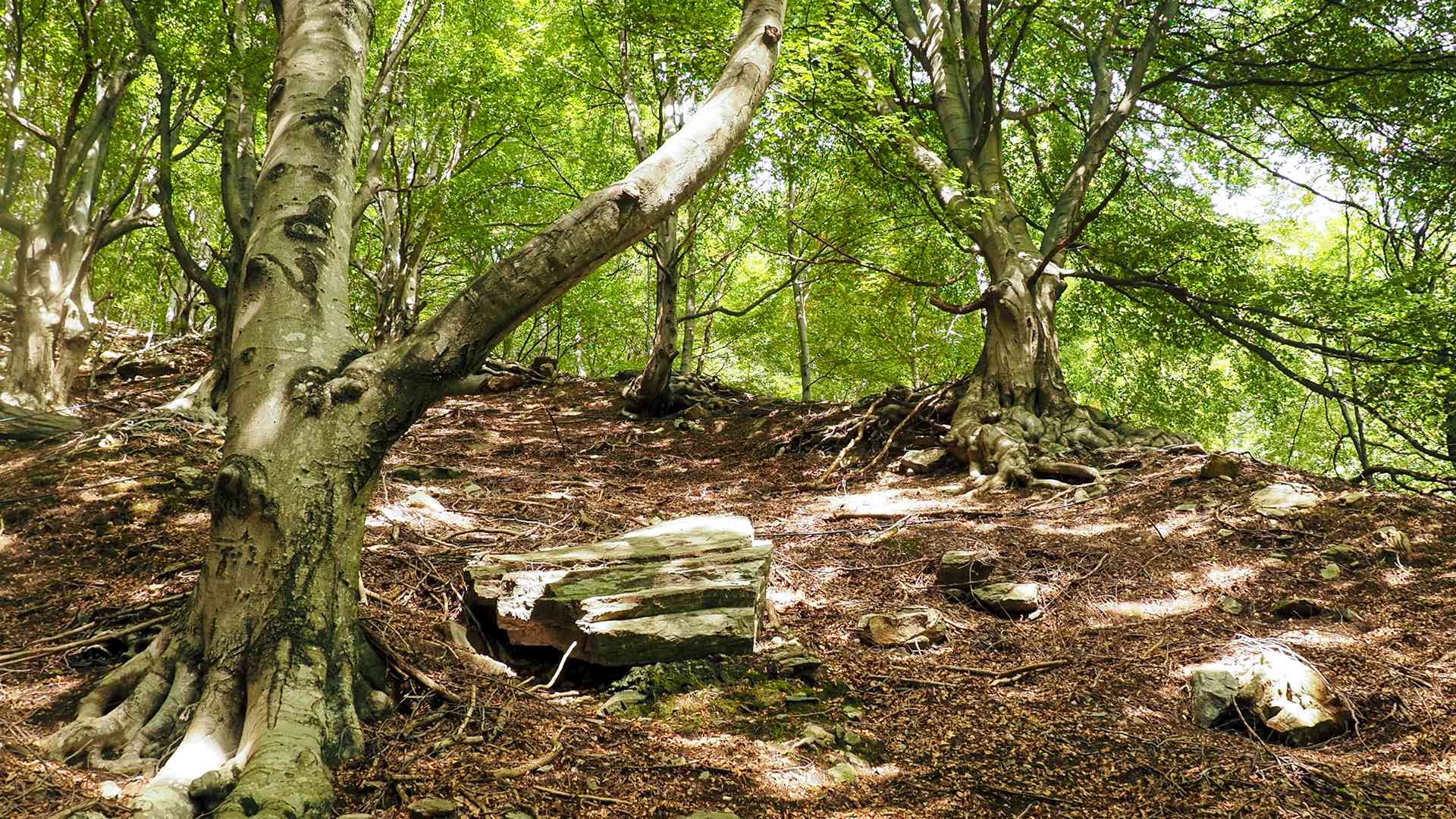